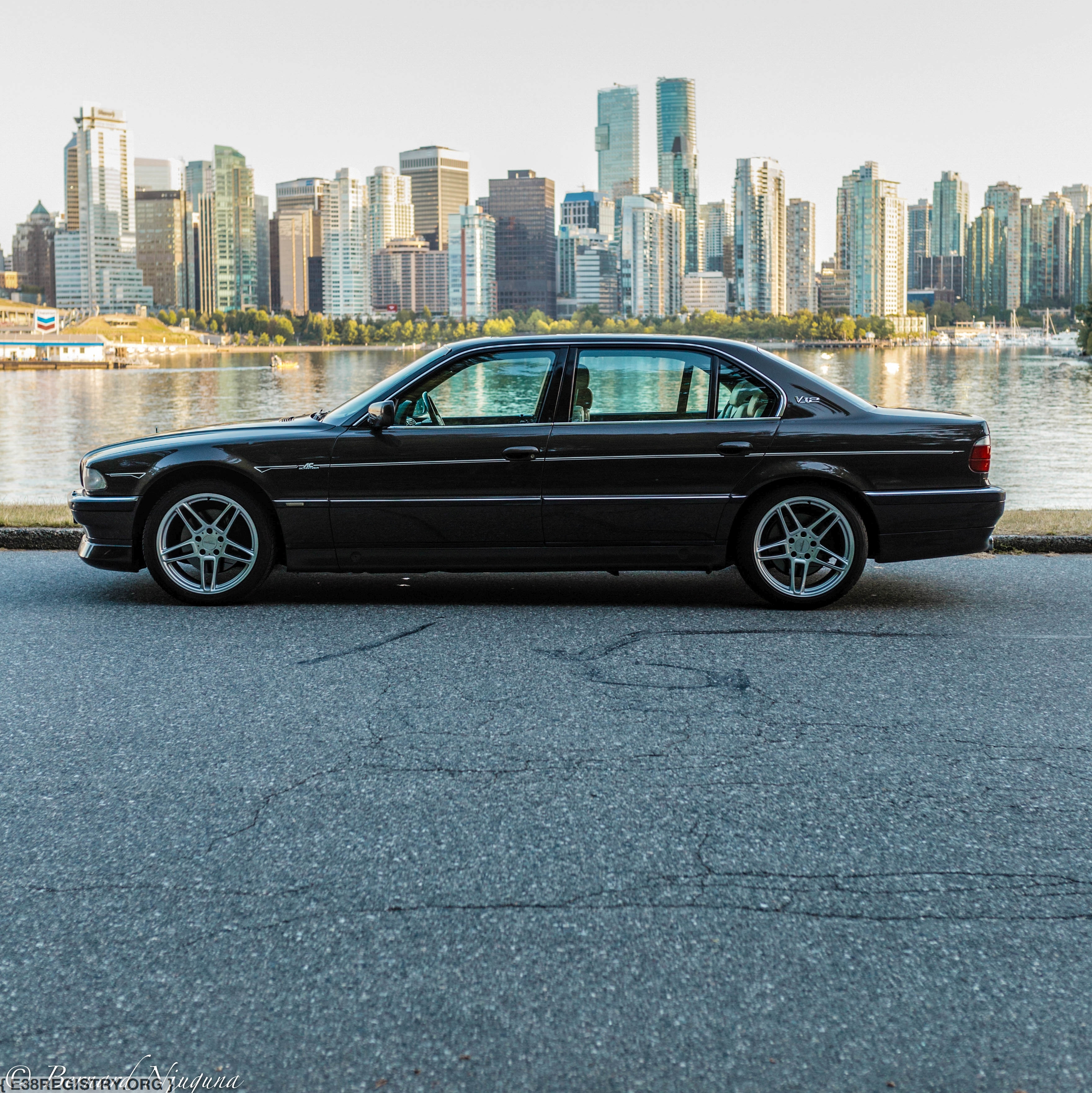 Several years ago, I first saw this car for sale at a much higher price (and arguably in much better condition). It was, pretty much, my ideal 750iL: great exterior color, my favorite interior colour (Lotus White), and with a rare Individual option (the mini fridge).

Unfortunately, it was way out of my price range at the time. Fast forward to 2017, and the car is a little worse for wear, but the seller is much more motivated. We arrived at a fair price for both of us, and I picked this one up to be my daily driver.

As it stands, it has some larger patches of rust, peeling clearcoat on the roof, and miscellaneous broken pieces of trim. The navigation apparently does not work. As with my 740i, I will document the restoration process extensively. For now, the first step is giving it a thorough cleaning.

Picked it up with no ABS, no Traction Control, and snow on the ground. Check engine light also came on. Definitely an eventful drive home, but made it safely. Also noticed the headliner was sagging horribly. Luckily, I still had the headliner and other pieces from one of my previous E38s (this 740iL). 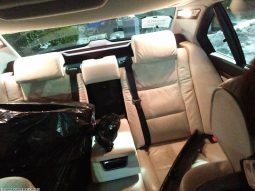 Headliners usually sag due to humidity entering the car… And the car, oddly enough, was missing several lights on the dash, like the high beam light and the turn signal light. Oh oh.

Turns out, the sunroof seal had disintegrated:

It was leaking water into the interior, and that water fried the LCM.

With one of the major issue taken care of, I could address the check engine light. It was a MAF code, and closer inspection revealed two “generic” MAFs. No wonder. Bought a pair of Bosch MAFs, and that fixed the issue. Getting the hood open was tricky, as the cable is broken. Luckily, I had a very expensive BMW special tool handy.

At this point, the car was running and not leaking water inside. I could finally plate it. I also replaced the headliner with a black Alcantara headliner from the 740iL.

Sadly, this is how the driver’s seat looks. Very worn, and a couple of holes. I’ll have to source a replacement. Unfortunately, BMW only produced around 100 E38s with Lotus White upholstery, without piping. Finding an exact match will be tricky.

Doesn’t look too bad in the dark.

Took the car to a friend’s shop (Car Boy in Richmond, British Columbia), for some exhaust work. The car was impressively clean, with only the signs of minor oil leaks. I was impressed. At least something on this car was taken care of, heh.

All in all, the car is in ok condition. The overall mechanical condition balances out the cosmetics. Major issue right now is the DSC/ABS light (making progress on that as of 20/03/2017), and then, that’s it really…

Addressing the cosmetics will be tricky, but the car does have some nice angles: 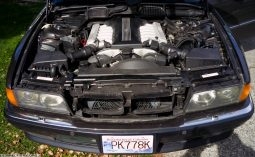 The ABS/DSC issue was resolved, and it was interesting. The error I had was “Pressure Sensor”; however, the troubleshooting was a little trickier, as the DSC system on this range of 750s (9/97 to 3/98) was a hybrid of DSC 5.0 and 5.7… Finding parts was difficult.

Luckily, a local breaker had an 01/98 750iL with a working ABS system. Several hundred dollars later, I walked out with a used ABS module (located behind the glovebox) and a used DSC pre-boost pump (NOT the DSC pre-charge pump; this one is specific to this model. Note the extra DSC hydraulic block):

With that major problem resolved, it was time to address the major cosmetic issues. The windshield was cracked from a rock, the roof’s paint was destroyed, and the trunk had rust and large dents. I took the time to mount the AC Schnitzer kit I had sitting in my garage. Here are some pictures of the mounting process, and some comparisons between the real ones and the DTM Fiberwerkz fiberglass replicas:

Paint time! First picture is a recap of the sorry state of the roof. Since this car is a daily driver, I opted to have a friend of mine paint only the parts that were the most damaged, to minimize costs. The idea was to have a “pretty good” paint job, not a “Pebble Beach” paint job.

The end result was surprisingly decent!

Next up were replacement tires for my very tired Vredestein Ultrac Sessantas. I went with the General Tire AS-03, and it’s been nothing short of excellent so far. Looking forward to testing it in light snow, although I’m not expecting to be able to move much. At the same time, I refinished two of my ACS Type IIIs. They were refinished in OEM silver, and over the winter I’ll decide if I refinish the other two in OEM silver also, or refinish the silver ones in gunmetal to match the other side.

And finally (for now) AC Schnitzer stripes. I used Avery Reflective White vinyl, and it came out pretty good. In the first application, the rear quarter panel was misaligned, but was fixed afterwards.

Finally, picked up some Japan/Gulf market V12 badges, and installed them on the trunk and C-pillar:

That’s how it sits right now. I’ll add some more pictures, weather permitting. The car drives fine, with no mechanical issues or leaks. Quite surprising, all things considered. Next step is tackling the major rust spots, especially on the driver’s side, and refinishing the other side of the wheels.

During the fall, I upgraded the interior to have the Chromeline accents from the European-market cars. They include speaker grilles, door sills, shift knob, centre console, door lock pins, and armrest.

Some random shots from the fall:

Winter came, and so did the time to put the not-very-sexy 16″ bottlecaps on, with somewhat used Blizzaks. Putting them on, however, revealed an issue with the right rear hub, probably exacerbated by  sitting in a field for several years…

Sourced some European-market BMW Individual turn signals and rear lights. Also went back to the freshly refinished 19s. since it appeared that it wasn’t going to snow again.

The wood trim on the car is sadly cracked, so I switched it for mint inlaid trim from a newer 750iL. I soon found out, however, that the brown inlaid trim in my car (pictures here) is different from the red inlaid trim I replaced it with (pictures here). I eventually switched back, but here’s a few pictures.

Weather was nice, so I took the opportunity to replace both window regulators on the driver’s side, and replace all four brakes and pads with PowerStop slotted rotors and low dust pads. Made a world of difference!

Then, disaster struck. Winter came back with a vengeance! I had to do some mountain driving soon, and I had some spare AC Schnitzer wheels that came with a 740i I purchased (and then sold to a good friend; pictures here). With 48 hours for a heavy snowfall to start, another good friend (Tak, owner of Car Boy Auto Repair in Richmond, BC) came through in a pinch with a set of 18″ Blizzaks! Crisis averted, and the mountain trip was a success:

After I was sure the winter was over, the 19s went back on one more time:

With the weather nice and predictable, it was time to tackle one of the major rust spots on the car. I had two options: patch with filler, or do a complete repair by replacing the dogleg and part of the rear quarter. In the interest of minimizing downtime, I went with the quick-and-dirty with filler and patience, and eventually (if necessary), I’ll replace the sheet metal. I enlisted the assistance of a friend that’s building a boat to help me with the fiberglass. It turned out quite decent!

Some interior shots after more cleaning. The missing memory button panel in the driver’s door has since been replaced:

One of the most desirable interior upgrades for E38s are the rear fold-down picnic tables. Finding a set in Lotus white would be nearly impossible, but Mark (pictures of his 750iL here) used his Russian contacts and sourced me a set! Installing them required some creativity without the correct brackets, but the back seat now looks almost perfect!

A trip to the junkyard gave me a very rare Japan-market parking pole, that will double as a diplomatic flag holder (until the proper ones can be sourced)!

Finally, a quick glamour shot from a beach day: