I see this question popping up a lot. So much that I decided to write a post about it. 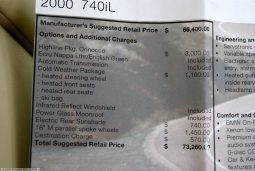 The package was available for the 2000 and 2001 model years, and is characterized by Midnight Blue or Orinoco Green exterior paint: 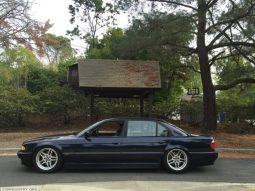 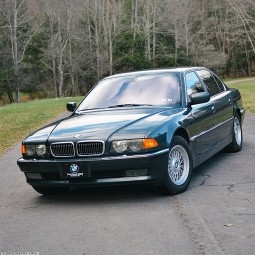 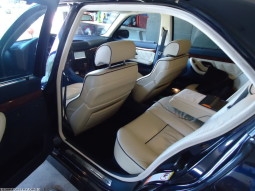 The color scheme was indentical among 750s and 740s.

However, the materials for the door cards, dashboard, center console, and seat backs varied according to the model, and this is where the confusion starts. To understand that, we have to first understand BMW Upholstery codes.

N6/N8 indicates stitching and seam patterns, and it also indicates the materials of those parts mentioned above.

There are other codes, such as N9/P1/P4/P5, but if you’re curious about them, check the Upholstery section. The second part indicates the color; in this case, SW indicates Schwarz (black).

These codes, however, were used first in the 750iL. Additionally, L7 is the code for “Extended Nappa Leather”, which would include, at a minimum, a leather center console. In the case of L7EE and L7EC, however, it indicated that it had said upholstery, plus the aforementioned leather/leatherette bits available in the V12 models.

Therefore, since the 740iL does not include those extra leather bits by default, the early 740iL Highlines produced from May 1999 to July 1999 had to be processed through BMW Individual, rather than be assigned a code that could cause confusion in the assembly line:

Here’s the Individual Data, for example, of an early 740iL Highline:

However, BMW appears to have sorted out that confusion internally, and late 2000 MY 740iL Highlines were produced with the L7EE/L7EC upholstery codes, starting in November 1999, and lasting until the end of the production run. Note, however, that they still had the regular 740 vinyl door cards, center console, and dashboard pieces.